Am I qualified to write about cats? I sure thought so. I’m well into my second generation, having seen twins Libby and Putz through their seventeen-year stint from birth to garden. I have to struggle to remember their unmarked graves, lest I pay them a surprise visit while doing my spring planting.

God sent Spek to replace them almost immediately by leaving her, a terrified kitten, in my juniper bush. That was seven years ago. Romeo showed up four years ago as he went from house to house, and didn’t bother to leave.

So when I was offered a chance to write some essays about cats, I pounced. I wrote about them literally from stem to stern: how to read their minds and analyze their tails. How to tell a male newborn from a female (it’s harder than you think–the obvious pearls of wisdom aren’t apparent yet). I wrote the whole poop on cat litter, and a story about how to groom a cat, titled, Hair To Eternity. 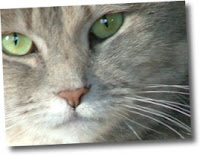 One essay was about how to know what your cat is trying to tell you. So I was qualified enough to notice my own cat Spek yelling at me through the veranda door when I came home at two o’clock in the morning. She’d been locked out on the porch since . . . hmmm . . . lunch.

Opening the door, she skipped the hero’s welcome as she hustled past me to the litter box. I didn’t need any essay to help me interpret her body language. It is commonly known that cats don’t have opposable thumbs, but few people are aware that cats can independently raise their middle finger.

I offered her the feline equivalent of apology roses: a can of Whiska’s Whitefish and Shrimp Feast (which, curiously, is brown). She ate it without satisfaction, her tail raised high so that the Brown Eye of Disdain was always aimed at me.

I gave up with a sigh and headed for bed, stopping on the way to check my e-mail. A pop-up from my calendar interrupted to remind me that the day had been Spekky’s birthday.

← Dash to The Finish One-Eyed Jim →