The internet is helpful, mostly. The telephone: now there’s a handy device. But every single day I pause to give thanks to my favorite invention of all: my toilet.

Every vulnerable, humbling, shameful experience gets washed away discreetly, at the press of a silver lever. Gone, down a swirling system of anonymous underground tubes. Nobody has to know. Forgiven.

I won’t ask you to imagine life without it. The second I do myself, I whisk my thoughts away to something less awful. Puppies. I have a new puppy. Can I show you pictures of my new puppy?

I’ve fixed a few toilets. Leaking, maybe, or not flushing, or not filling after flushing. I enjoy the clever mechanicals inside the tank, a Rube Goldberg contraption of levers, floats, and chains, even a fountain. You can replace all the guts inside a toilet for under twenty dollars. It’s as satisfying as an Erector Set.

What I never aspired to do was replace a whole toilet. Nobody asked if I wanted to. I didn’t want to.

I was remodeling a bar which had three apartments above it. I arrived to work one morning to find a waterfall which hadn’t been there the night before, cascading over the brand new stage I had just built. I hadn’t even put the carpet on it yet. Now it was curling up like a potato chip.

I ran up the stairs to find a bathroom filled with broken chunks of ceramic that had once been a toilet, its clever fountain mechanism still valiantly toiling away to fill a tank that was no longer there but for its jagged base. The tenant, Jimmy, drunk, had lost his balance while relieving himself, grabbed the medicine cabinet for support, pulled it clean off the wall, threw it into the toilet tank, smashing both, and then fell asleep for six hours, face down in the cool, soothing new creek.

When he didn’t show up for their routine morning coffee, his neighbor came looking, found him sleeping there, and pulled him into the bright new day. It didn’t occur to the neighbor to shut off the water.

I had just installed two shiny-clean new toilets in shiny-clean new bar bathrooms below, so I knew how it all went together. Thanks to Jimmy, his toilet was already drained, so it weighed about half what it normally would. But removing a used toilet is still a very intimate procedure. It is sealed to the floor with a gooey wax, colored an unfortunate yellow-brown. Peeling the bowl off the floor is like opening a quesadilla. You can’t stop yourself from peering into the exposed drain.

There is no other way to prepare the newly exposed portal to Hell than to get down on hands and knees with a putty knife to scrape off the remaining tobacco-juice-colored wax. There was a rust-colored crime scene outline where the toilet had been. You scrub that off too, scrub all around the floor where rags and sponges haven’t been since the last toilet was smashed. You’ll find once you start, you’ll want to scrub everything nearby. Last, you scrub yourself: your hands, your tools, your memory.

New ring of wax, new toilet, all steps I had done before.

Jimmy was very sorry. He slunk into the bar later that day to apologize. He promised he wouldn’t drink so much. He and I had become friends, and this was a big dent.

I first met Jimmy the day I bought the rickety old bar. I climbed the long stairway up to the three humble apartments above, and timidly knocked on his door to introduce myself. After a short wait he yanked the door open and jutted his one-eyed face out, the pink flesh and muscle of the empty socket still pulsing to control the long-gone eyeball. I resisted jumping down the entire flight of stairs in a single bound, and in the end we had a cordial chat.

He owned a glass eye, but didn’t wear it around the house. He popped it in the next time I saw him, when he wandered into the bar to check on my progress. He pulled up a chair and gave me advice, and told me stories of the old bar. How he didn’t go there anymore, instead making a daily trek a couple of blocks down the street to Burke’s Pub, where he had his mail delivered. They’d cash his retirement check and apply it directly to his bar tab. A retired bricklayer, his body was broken and tired, but he got around. Soon, a visit to my restoration project became part of his daily ritual.

He had a glass eye, but didn’t wear it around the house.

At Jimmy’s funeral I learned he had beautiful children and grandchildren. An honor guard was there — Jimmy had been a Marine. He drank to ease pain in his back because he couldn’t tolerate his painkillers. I had known none of this, except for the drunk part. I could not recall him having a single visitor, but today the mortuary was full.

I’m finishing the basement in my house now. There’s nothing down there yet, so no harm done as water began dripping down onto the floor beneath the tiny bathroom overhead. I waited a whole day to begin the repair, so earnestly did I hope it would just stop on its own.

I discovered the floor under the toilet was saggy, so I shored it up with heavy beams. Then I went through the whole toilet procedure again: scraping off the sticky wax, replacing the rusted bolts, scrubbing away the ghostly outline on the floor to wash away past sins.

Yet still, the drip continued. The seal that connects the tank to the seat was now dripping, probably from all the moving.

There is a delicate stasis one sometimes enjoys with an old house. You fix some things, and you agree to leave some things be. I call it my Balance of Decay theory. I developed it while maintaining my 1964 Volvo. The electric clock on the dash didn’t work. While fixing that, the wipers quit, and while repairing the wipers, the radiator fan failed. Just one bolt removed it, but to get at that bolt I had to remove the whole radiator, and I broke a brass fitting that was nearly impossible to replace. But I did, and when I was done I noticed the clock had stopped. I left it.

Now I had disturbed the balance in my house, fixed one too many things. Gremlins were now free to prance gleefully throughout the pipes. All lines and seals were replaced (for under twenty bucks!), then the shut-off valve itself began a slow, rhythmic drip, like the deliberate tapping of my father’s finger as he was about to give me a lesson.

It happened to be New Year’s Eve, and our annual party was imminent. The hardware store was probably closed, and regardless I knew better than to start a plumbing job before a holiday. That’s how plumbers get rich. As we contemplated whether to wrap the whole bathroom in crime tape, the leak stopped on its own and a grateful quiet settled back upon our house.

On New Year’s Day I sidled up to the toilet and pressed gingerly with one foot, then the other, to make sure the floor itself wasn’t about to give way. I glanced underneath for puddles. Everything was fine. The world was fine. The clouds parted and Heaven smiled. The horrible biological leftovers of a raucous New Year’s Eve were washed away at the press of a chrome handle. Forgiven.

Did Facebook and Twitter break the world? We used to be nice to each other (at least face to face) and we managed to disagree without throwing punches (mostly). Have we lost civility forever?

On St. Patrick’s Day in my elementary school you were supposed to wear something green. If you didn’t, everyone had the right to pinch you. So far as I can remember, this was the only opportunity to pinch another boy and not get slugged in return.

August in Nebraska: the wet 95 degree air squats like a heavyweight wrestler on your lungs. It was my day off, but I was called back to my bar. The air conditioner had gone out again. I knew what was wrong, the same thing every time. Humidity wrung from the air drips...

Tomorrow is my birthday. Today is the last day of my fifties. Happy Sixties Eve to me. I sure didn't skate through my fifties. I fell in love, got married, published a book, released an album, and recorded a soundtrack. I learned to ride a unicycle, juggle wooden...

As a kid I was always up at dawn. Every day was an adventure and I was eager to get started. I’d teeter downstairs and join my dad, who was inevitably sitting in his boxers, leaning on his elbows, updating his to-do lists in his back-slant lefty handwriting. Mom...

Mary Avery grew up on a prehistoric dome of salt in the middle of the Louisiana marsh. It was a huge hill: six miles around, with caves 50,000 feet deep. It belonged to her parents, so naturally she wasted no time escaping it. In the early 1800s Mary was happily swept...

Millions rushed out to buy an Instant Pot, this year’s hot kitchen gadget. Many were disappointed to discover the Instant Pot didn’t deliver that kind of pot. It didn’t even deliver instant. But it is a pot. You can bake a potato in 10 minutes! That is, if you don’t... 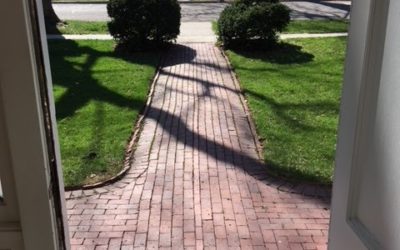 As Number Five of six kids, I didn't get a lot of new stuff. I felt like a superhero when Mom put new blue patches on my worn purple jeans, like the Six Million Dollar Man with his arm re-attached.So it was a big deal when Dad took me to pick out a new bicycle. My...

Take a Load Off

Thanksgiving gluttony skidded right past Christmas indulgence and T-boned into New Year’s revelry. Cookies and cocktails everywhere every day. I can’t say no to them. That’d be rude. So here am I, as wide as I am tall, psyching myself up for another annual New Year...