What do you do when you find out your best friend has been keeping the biggest, juiciest secret ever from you for years?

Why hadn’t he ever told me? It‘s not like I’d publish it in a blog or anything.

My plan for January was to sell the bar, then take a long weekend visiting TJ in Portland, where he now lives on a secluded mountainside. It was to be a rinse retreat, to help put one life behind me and orient my heart toward a new one. The bar sale ended up delayed, and I already had my tickets so I went anyway. Instead of a philosophical retreat, we just drank margaritas all weekend.

Back in junior high, TJ and I used to hole up in his bedroom and play guitars. We’d put on an LP and sit around the alter of his fancy stereo studying what the artist was doing, trying to imitate it. TJ would sag into his squeaky beanbag chair and I’d lean back up against the side of his bed as we strummed through John Denver or Loggins & Messina. This was before they invented gangs.

TJ builds guitars now, the most beautiful instruments I’ve ever seen. While I was there I got to help work on one, and I got to play about $50,000 worth of others in between rounds of pool, margaritas and his outdoor hot tub. 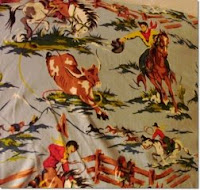 At the end of my first day there, I was deliriously relaxed and sated. My bleary, tequila-tinted eyes blinked slowly.

“Did you give him the cowboy sheets?” his girlfriend asked.

“They’re already in the guest room.”

“Cowboy sheets?” I blinked. I suddenly imagined gray sheets used by another visitor smelling of leather and cattle, which sounds like the same thing but it isn’t.

“I found TJ a set of flannel sheets with cowboys on them,” she explained, as if that explained anything. She’s a master shopper. She could find weapons-grade plutonium, and she’d get it 30% off. “They’re magic. You’ll sleep great.”

“Since I was a kid I wanted cowboy sheets,” he told me. “Mom once asked me what kind of sheets I wanted, and I told her cowboy sheets. She went to Sears, but came back with the wrong sheets.”

“What did she come back with?”

He gave me a steely look. “She brought back the wrong thing. I begged her to go back and exchange them for my cowboy sheets. Begged,” he repeated, a desperate junior high boy look returned to his eyes. “She said returning them would be too much trouble. ‘But Mom, you work at Sears!’ But she wouldn’t do it. Never did.”

“Seriously—what were you stuck with?”

A pained look curtained his face. He hesitated.

TJ makes the best margaritas ever. Having gone through junior and senior high with him, I’ve had pretty much every drink come out my nose, so this was just one more.

“Yep. Little Cinderellas all over.”

“So what did you do? Just use plain white sheets?”

“I only had the one set. We’d take them off, wash them, put them back on.”

“…you had Cinderella sheets, at that time, on your bed?”

“I had a bedspread.”

Parents: I have just figured out how to teach your child to make his bed.

Years ago I took karate lessons. I earned a black belt, even became an instructor. TJ was my instructor. He owned the school. Because I was as big as he was, he used me for a lot of demonstrations. He would hold me over his head like a giant letter T, pausing casually to explain the technique to other students before resuming and tossing me to the floor. One night he knocked me out cold with a heel to my temple, and I am six-feet-two. I have regularly been on the receiving end of his hands and his feet. TJ gets a certain look in his eye before he pummels you, and I know that look very well.

Dumfounded, I said, “I can not believe, for all these years, that I never knew that.”

He gave me the pummel look.

I can’t believe he thinks I’d tell anybody.