I grew up with a little black dog. I don’t know what kind she was, and I don’t care. She wasn’t my dog—she was in the house before I was, and she always looked at me as if to say, “Who let you in?”

Her name was Eenie, as in “Meenie Minie Moe,” which were the names of the rest of the litter, plus a runt named Charlie. It was the only charming thing about her.

She was old. Her fur was stiff and wiry, not soft to touch, as if she would let you touch her anyway. She growled and snapped at me. When I learned that you could call female dogs “bitches” and not get grounded, I used the term at every opportunity.

As happens with most pets when you are small, one day she was gone. No fuss, no explanation. My four older brothers and sisters did not keep me apprised of every family event—maybe they were crushed and I didn’t notice that either—but I suspect that she was sent to live “at a farm.” But I was too embarrassed to ask, because I didn’t know how much time had passed before I noticed she was missing.

The first thing I did, though, was beg for a puppy. Every day for years I supplicated, regular as a morning yawn. Once my dad brought home guppy and said it was mine. Was that word play? It was one of those ugly black ones with spherical bug eyes on either side of its head. He put it in our big aquarium with the other guppies. “You can feed it,” he offered.

He just walked away, thinking I was the weird one. 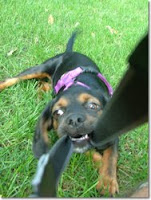 A few years later—I might have been twelve years old—I was sitting in the bathtub, quietly crying to myself. Looking down at my pale belly, bulging out from a big dinner, I was afraid I would grow up to be fat. (Wasted tears: two years later I was 6 feet 2 inches tall and 125 pounds.) The door to the bathroom creaked open, and I shrieked, “I’m in here!” We were not one of those families who walked around naked in front of each other. Indeed I hadn’t seen anything between my mother’s chin and knees since I was breastfed. But the door opened farther, and in horror I bleated again.

A three month old labrador puppy sniffed his way in.

My dad said the pup belonged to the whole family, but I named Howard and he was mine. I immediately began training him, walking him, feeding him, sleeping with him. Three months later he was dead, run over by a car while I was at school.

I was a very controlled kid. Besides when I was little, I can only remember two times when I sat on my bed and just cried. The other was when Nancy Patsios broke up with me in junior high, even though we hadn’t actually dated.

After a few years, I began asking for another dog, but it was half-hearted. Two weeks after I left the house for college, dad brought home a stray mutt. She needed a lot of care and attention. They had to clean up after her and listen to her bark about random things.

It was then that I realized who the household pet had been all those years.