When I was in high school I bought an MG. it was only $500, because its owner had driven it into a pole so hard that the bumper touched itself on the other side. The smash cost me $1000 to fix. It wasn’t a bad deal. I drove it for four years until I sold it to buy a wedding ring.

The first crash I was invited to join was when three high school classmates ran a red light, and I T-boned them on my motorcycle. As was my custom, I was speeding, which might have been good because I jumped right before the impact and flew over the whole mess. Time went in slow motion, so I had plenty of time to see six pie-eyes through the windshield as I went by. That one cost me $600, because they lied to their dads about the red light. I didn’t get screwed again until, as I said, I sold that MG.

Five years later I changed lanes in my windowless Chevy van while a guy was trying to pass me. Everyone passed my van, so I should have expected him, but I didn’t. I dinged his fender. His fender dinged me for $300.

Although plenty of people have taken little potshots at my cars since then, I was never around, so I didn’t know who to shoot. Twenty-five years have passed without me being in an accident, which is unfair given how I drive. I once went from downtown to my house at 70mph. I hit all the lights, and nothing else. 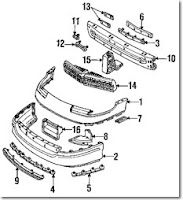 Like everything else over the years, crashes have changed.

I borrowed my girlfriend’s shiny new silver truck to pick up a few groceries, and as I was leaving I accidentally backed into a light pole that was wisely planted in a fat, barrel-shaped concrete base. I was going 2 miles per hour, which is slow even for going backwards. It is a high-tech vehicle, with airbags in the front for head-ons and airbags on the sides for T-bones. It doesn’t have an airbag on the back for stupid.

It made a terrible crunch, so I figured I cracked the plastic cover over the spare tire. Although it costs them $3 to manufacture, I knew it would cost me $250 to replace. I didn’t even bother to look until I got home. It’s only a bumper, and bumpers are designed to bump. When I did look, it appeared that the pole my MG once hit had come back for revenge. I think her truck is made out of fine china.

I didn’t know where to take it for repair. Luckily, I don’t know anybody in the business. I asked a friend, “You’ve had body work done, right? Who did you use?” She looked down at her sweater and back at me, her mouth agape. “No,” I added quickly, “your son’s car—remember?” So I guess I got two answers.

But it doesn’t matter where you go anymore. They all charge pretty much the same. They type into a computer what damage is done and how well you’re dressed, and it prints a bill. Body shops used to be gritty affairs, but the one I went to had a waiting room clean as a dentist’s, with the same magazines and the same drill noises.

A bumper only has one job to do. It is supposed to let you bump things. These days bumpers are ugly but resilient, with pistons and springs and bendy stuff, and a plastic cover to make it all presentable. I had hoped to replace only the crinkled facade, which I figured these days would cost $1000. Ironically, the part was only $250. I saw it in the middle of the estimate, which was $3118.

For future protection, they recommended that I add on the optional $200 mattress, which they rope onto the back of the car. I’ll sleep better knowing it’s there. They smiled and waved as I left, knowing they had made another boat payment. I drove over the curb because I was afraid to back up again.