In the beginning, there were the original twins, born of the original sin. Maggie’s cow-like black and white spots caught the green eye of a marauding black tom, who drug her away by the scruff into the bushes, where she apparently enjoyed the unspeakable.

A litter soon followed: three little Holsteins, and one tell-tale black kitten with green eyes. Two cow kittens were adopted, and I kept the other two.
Like all biblical twins, my cats were exact opposites. Libby the cow kitty was sweet and loving, got along with everybody. Her twin brother, as black on the inside as he was on the outside, was scared of his own shadow, hated being touched, and turned everything into a litterbox. They were Elaine and Abel.
With the same logic that people name cats with white feet “Boots,” I named him Putz. Libby was silky soft and healthy. Putz had mangy bald spots and colon problems. They eventually died just four months apart, of old age; Libby’s kidneys were failing, and she passed peacefully after an injection. Putz dripped and oozed his way through seventeen years of my life before he gave up, toothless, arthritic and cross-eyed.

With mixed feelings of heartache and elation, I was liberated. I intended to go catless for a while. But as often happens, cats arrive without invitation. At two months of age, Spek fell from Heaven into my juniper bush. Romeo was donated to me by someone who couldn’t stand his constant moanings throughout the night, which sounded like a skin flick soundtrack. 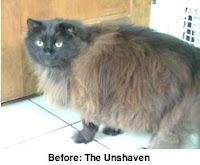 Like the twins had been, Spek and Romeo are yin and yang: she is Mary Poppins, perfect in every way. He is Bert, ashy and dusty black, but he wins your heart with relentless efforts. She is lithe and short-haired. When anyone meets him, they exclaim, “Holy cow, he’s fat!” I try to explain that he is just big-haired, but the damage is done.

Romeo has always struggled, pawing his way through life. He first came from the Pound with a butchered street haircut that exposed his scrawny ribs. He was always picked last for basketball. Chased by bullies, he escaped by a whisker. His nickname was “Puss.”

Romeo’s ’fro eventually got of hand, too long, thick and matted to lick. Slimy hairballs were appearing everywhere this summer, just in time for barefoot season. The first hot days made it all too clear that it was time for Romeo’s annual buzz. 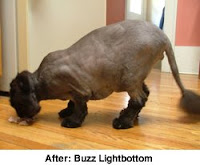 Romeo surprised me with this announcement: he wanted to donate his ample locks to a new charity, Sweaters for Sphynxes. They knit coats for those rat-looking hairless cats like Mr. Bigglesworth, who, thanks to the miracles of inbreeding, are born bald, a cross between a wingless bat and Yoda.

The mood was somber as we sheared Romeo like a lamb. He puckered sheepishly as the humming clippers razed around his delicates, peeling off thick sheets of pelt. We filled a garbage bag with enough fur to knit two cardigans, one coat of many colors, and a matching set of gray mittens, which for cats is two pair.

Romeo’s good karma is already apparent. Putz, the Patron Saint of The Scruffy, smiles down upon him. When it came time to choose sides for basketball, Romeo beamed as the skins team picked him first.