A Bang Up Job

They call it The Peanut.

But it’s a peanut that’s 230 feet wide and 90 feet across. By my calculations it would make 37,000 jars of peanut butter, except that everybody has driven all over it and it is made of concrete.

Technically, the Peanut is a roundabout, in a round-about sort of  way, because it isn’t round. It sits at the intersection of North 50th Street and Seward. And Country Club Avenue. And North Saddle Creek Road. And Happy Hollow Boulevard. Amid eight weaving, intersecting lanes, it is an octopus of befuddlement. With the addition of those little triangular traffic islands, there are a total of fifteen ways in and out of The Peanut. It was designed to simplify a difficult intersection.

The Peanut was initially covered in cinderblock, later replaced by grass in a beautification project. Because so few people can navigate its zig-zaggy bends, the grass has mostly been run over. 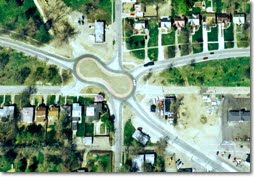 Behind a big white commercial van, I began to enter The Peanut. But the van stopped in front of me. Halfway in, I had barely started my turn when I saw his backup lights come on. He wouldn’t.

The two horn buttons on my old Honda Accord are each about the size of a quarter. Banging on the center of the steering wheel doesn’t do anything but deploy the airbag. The horn buttons are hard to find when you’re driving straight. When you’re turning, honking becomes a game of Whac-A-Mole.

My horn never did make a noise. His big truck had a backup beeper, but it barely got out one beep before he T-boned my door. Mr. Van Man took off, and I took chase. My first thought: “Your fat-ass van got nuthin’ on my Honda.” I was almost disappointed when he pulled over in a parking lot. We got out and expressed our mutual opinions of each other’s driving.

He accused me of following too closely, which on any given day could be true, but I reminded him I was sideways. When another driver pulled up and offered that he saw the whole thing, Whitey Van Man got nicer. After promising to take care of things, he took off again, leaving only his first name and a cell number, which of course he is no longer answering. So the cost of my car repair will now include a couple of police citations.

The other culprit we don’t know is Who Designed The Peanut. I have orated on the need for a big plaque honoring the designer of The Peanut, so we can refer to it by its more proper name, like The Bilbo Bongwater Roundabout Debacle, or The Horatio Huey Hootenanny — Huey Hooey for short. Instead of cursing it generically, I’d like a more personal touch.

A few days later, after no response from Boobus Van Hittenrun, I staked out The Peanut to see if he might drive by again. There I sat, dark glasses and everything, scrutinizing every car. People avoid you when you just sit in your car in an empty parking lot. It’s fun.

Navigating the serpentine legume, one out of every three cars bounced over a curb, one hundred percent of those cars had drivers who were on the phone, each one exclaiming “Shit!” amid their blandulous blather about what’s for dinner.

The Peanut would be a metaphor for life, except life doesn’t have someone to blame for it.

← In The Bag Model Behavior →