A blizzard was coming. I was waxing up my old sled, the red paint on its metal runners rubbed off by dry patches. My mother was looking at my thin tan jacket, the sleeves closer to my elbows than my wrists after another growth spurt. “We need to get you a new winter coat,” she pronounced. I was generally oblivious, but when she pointed it out, I concurred. She sent me out into the blizzard with Dad.

This was an event. We weren’t poor, but there were six of us kids and we didn’t get a lot of new stuff. The snorkel-hooded parka was the latest fashion, and Dad bought me one. It had sleeves that covered my whole arm and a fur-trimmed hood that rolled out long and narrow to protect my face. I was afraid to say “Thank you,” fearful that even a blink might mess up my lucky streak.

I buttoned its buttons and zipped its zippers, then walked out into the storm and stood straight.  White razors of snow cut across my tunnel vision, but I didn’t feel a thing. This was what Eskimos see looking out the door of their igloos, I thought. 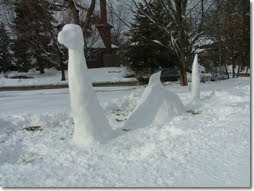 I was liberated. I grew up in a smallish Nebraska town. (Yes, they all are.) Planted randomly on the flat prairie like a salt shaker on a tabletop, the town took the full brunt of storms that built speed across the bald landscape as if rolling downhill. The next morning the wind stopped and the sun burned through vivid blue skies, a blinding reflection off two feet of heavy snow. The town bogged to a halt, silent as a blanket except for the whining of spinning tires.

Harold Smith had a snorkel parka too, so we grabbed shovels and headed out to rule the world. We got ten dollars for each sidewalk we shoveled. Digging out a stuck car usually got a $5 tip. It was the best money I ever made. Any money you make as a kid is a lot, because someone else is cooking for you, paying your rent and taking care of your utilities and clothing. If you make ten bucks, you get to keep all of it.

I thought shoveling snow for $10 was a goldmine. The reason I don’t do it now is because I have learned that kids will do it for $10.

Playing in the snow evolved. I went from snow angels to snowballs, which took some practice because my mom knitted me mittens, and yarn attaches to snow as if it were gum. It is demeaning to hit someone with a snowball and then have to trudge over and ask for your mitten back.

I moved up to a runner sled, handed down from my brothers and for all I know from my dad before that. It was an old wooden one with a T-bar you used to steer it by warping the skinny metal runners. My friends made fun of it, richer friends who always had the latest plastic snow sled invention. But they always wanted to borrow mine after I blew past them on the hill. Because it was wood and metal, it never broke like the rich kid sleds did, and so I never got a new one. Eventually I grew far too long for the sled, but it we couldn’t throw it away because it was still perfectly good. My family doesn’t throw away much.

I graduated to throwing my dad’s Datsun B-210 into wild spins, something I stopped doing after I bought my own car. Then I took up cross-country skiing. I tried it once in Colorado but I broke through the snow’s crust and found myself waist deep, unable to move my feet. The forest was so quiet I felt as if my head was expanding. I took out a pad and pencil and wrote an entire song while I was stuck there. It’s a pretty good song, but no matter how I analyze it, it has nothing to do with snow. Still, I thought it would be a hit, because nothing generates interest in a musician like being found frozen to death.

Today I went from snow forts to snow cannons. Preparing for an upcoming blizzard, I broke my little 17-year-old snowblower trying to get it prepared, and had to rush out to get a new one. Everyone else must have broken theirs an hour before I did, because the only ones left at the store were bigger and more expensive than I intended to get. it’s hard to dicker with a salesman when there’s a rush on snowblowers, a huge storm six hours hence and a line of impatient buyers fidgeting behind you. I swallowed hard and bought one.

It has an electric starter, but you have to plug it in to use it. It takes longer to plug it in than to pull the starter rope, but I used the electric start anyway because I paid for it. The behemoth belched to a manly purr at my finger’s touch, and nearly drove through the garage door.

It has a cannon turret you adjust with a crank, rotating it like a tank barrel to avoid hitting people, or to hit them on purpose. It has two speeds just for reverse, so it can run over you fast or slow.

I couldn’t wait to get my testosterone all over it. Unfortunately, it is so big that the job was over quicker than I expected. Reluctantly, I followed it back to the garage, feeling funny just loitering around blowing snow on stuff. I was cold too, and that surprised me. Usually I work up a good sweat. But I just followed this machine around, pointing it toward the real work as if I were a union boss.

Something fun. Something to tie to the back of the snowblower. I had to dig around a little bit, but I found that sled.