Cat litter now clumps. Whereas old clay litter just absorbed cat pee until it couldn’t hold any more, at which point you waited another two weeks avoiding the foul cleaning task until your eyes watered from the ammonia, clumping litter gets changed a little at a time. When peed upon, the litter turns very sticky, and can be harvested in little lumps.

I collect these little pee balls every day, respecting that my cats are not thrilled to navigate among gummy wads of their own urine-mud. They and I know they have other options, so we’ve come to this agreement. I was surprised one morning to discover the litter box to be one big solid brick.

Something spilled, I thought, but found no culprit. A Shih Tzu was visiting at the time, but I doubted such a tiny dog could produce even as much as my cats, while still having some left over for the living room rug.

Nope, something was up.

Again the next day, a brick. And the next. A big box of replacement litter usually lasted a month, but I was going through one every four days. The handle of my litter scoop broke off getting the gluey used litter out. 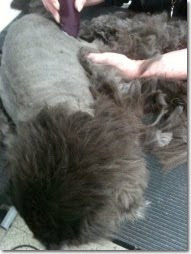 For a few years I dated a woman who was diabetic. I knew that rampant, voluminous peeing is a symptom of diabetes. (She never used the litter box. I just took her word for it. ) Thanks to her I learned a lot about insulin, diet and needles. I even had a “sharps” jar, where spent needles could be safely disposed. Explaining to visitors why I had a gallon jug of old needles always culminated in me having to expose the tender inside of my elbow.

It was time for annual shots anyway. I cartoned my cats Spek and Romeo and drove them to the vet. Their moaning was worthy of Edgar Allan Poe.

“Average blood sugar for a cat is around 80-100,” the vet explained flatly after testing Romeo. “His is over 500.” He didn’t bother to test Spek.

He handed me two vials of insulin and a demo pack of syringes. “Two shots a day, twelve hours apart. Come back in a week.”

When I’m having a bad day, I pile all my other unpleasant tasks onto it, to get everything over with. On the way home from the vet I took Romeo to the groomer. Romeo is a Maine Coon with a prodigious coat. If I could figure out how to spin his hair into yarn, I could knit a whole new cat.

That’s him being shorn in the photo.

Romeo arrived home naked and tired. Spek hissed at him because he smelled like the groomer.

As it turns out, insulin makes you feel better fast. Romeo has already made the connection, and purrs at the sight of the needle. “Hit me,” his eyes say.

Phooey, our Shih Tsu, hears the cat purring and wants in on whatever is happening. He begs for the needle. Like most dogs, Phoo has no pride. He is the first to come running when I call “Kitty-kitty-kitty!” I administer Romeo’s insulin while fending Phooey off with my heel.

We’ve changed their diet, eliminating all dry food. It’s been hard for Romeo to adjust. Spek is happy; she has always preferred that slimy pâté. Phoo, who has the shortest memory of any mammal, thinks every feeding is Christmas. So goes their lives now.

For eighteen years my home was occupied by opposite twins, Libby and Putz, white and black cats. I don’t know whether their feline souls are chasing mice and snakes in God’s barn now, but I know their silky mortal bodies rest in the dirt of my garden. I pray that I’m not asked to go through that again too soon.