I’m With the Band

It was a dream opportunity. One of my favorite bands asked me to join them.

Never mind that I was older. Or that I wasn’t any kind of a rocker. Although I own some Spandex, I don’t look good in it. As much as rock bands strive to have good songs, they ache for a cool name and a great look. I had the kind of look that fathers welcomed when their daughters brought me home.

I was raised on musicians like Paul Simon, James Taylor, Jim Croce and Carole King. It’s not that I was destined to play that kind of singer-songwriter music. It’s just that I was surrounded by it, much like being an American doesn’t make you like hot dogs but you all know how to make one. To teach myself guitar, I brought home songbooks I bought with my bus-boy profits. I’d hole up in my bedroom, put my fingers where the little dots told me to, and learn entire albums.

I’m a solid guitarist with an ear for harmonies, and this band needed both. Their badass, dread-wearing, singing, hip-hopping bass player had been kicked out of the band for punching the lead singer in the face.

It was just a month before their big CD release party, so two of us were brought in to take his place. It was a joy to learn the songs, because I loved every one of them. On the day of the CD release show, I stood on the stage feeling like a father having his photo taken as his daughter’s date at the senior prom: proud, but I knew I was not the first choice. Or the tenth. 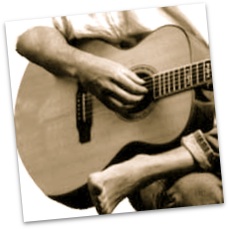 We played a few random gigs after that. A drippy bar or two. A festival out in the middle of a cornfield, with a stage cobbled from a flatbed trailer. In the humid summer heat we stood waiting while it occurred to the manager that they needed to run an extension cord hundreds of feet to to the stage so we could plug in.

Playing an acoustic guitar outdoors in the summer is like eating an ice cream cone: you have about two good minutes before it wilts miserably. It sounds like it’s wearing socks.

The lead guitarist, a wordless fellow so tall and skinny and with a cowboy hat so broad that he looked like the letter T, began making suggestions. “Why don’t we hang out, just the two of us, and play some guitar?” He didn’t mean, “Let’s be buddies!” What he was saying was “Why don’t you let me show you how I want you to play.”

Soon I found myself out of the band altogether.

Bands don’t really fire a member. They usually just morph around him, like in the Ben Folds song:

We stopped having rehearsals. There were no calls, no explanations, no questions. We all knew. The gigs stopped. After a few awkward months, we could see each other and act like nothing happened. Guys are great like that.

The reason so many bands pop up with a remix of members from other bands isn’t because the guys are great pals and all hang out together for the love of music. It’s because somebody got fired, in the time-honored, passive-aggressive tradition of males.

Guys break up bands like they break up with girls:
We need some time off.
It’s not you. We think you’re great. We just want to go in a different direction.
We can still hang out.

Last night I was on the bill with a few other solo songwriters, including the former lead singer of that band. We sat in together on a few of his older tunes, and like riding a bicycle the chords and harmonies came back. Older and paunchier, we played stripped-down acoustic versions of those songs on the small, unfussy stage. It felt so much more right.

My songwriter friend Beth once said that a good song was one that worked just as well on an acoustic guitar as it does under a truckload of lights, amps and Spandex. Maybe that’s why I was drawn to that band in the first place. I couldn’t rock the look, but I sure could rock the song.