My first tricycle was taller than everyone else’s. It was a hand-me-down, apparently owned by someone who rode it at age fifteen. My feet barely reached the pedals.

But kids were less judgmental then. We rode what we were given. I was given that tricycle, and I didn’t think about anything except how to grow into it.

Because its front wheel was so much bigger then on other trikes, mine was astonishingly fast. Due to its height, it cornered like a fifteen-high stack of hay bales, again and again planting me face first into the neighbor’s scratchy zoysia grass.

My best friend Eric and I were curious and handy. Soon we discovered we could disassemble our trikes into a pile of curved pipes and greasy bearings. Goofing around one day we discovered we could successfully reassemble a trike upside down: put the front wheel where the handlebars should go, and vice-versa. Flip it over, put the seat between the back wheels and—geepers! We had invented the Big Wheel! Only we called it a dragster.

When the other Big Wheel made its debut, I felt we were being watched. The Big Wheel was smaller than my trike, and Barbie-colored, but it sure looked similar. I had grown a bit by the time it debuted, so tall that my knees banged into the handlebars and its back axle sagged— turning the fat tires pitifully inward—but nonetheless I had to give it a try.  It made a weird rattly drum sound as I pedaled, like the empty plastic it was.

One odd day my dad offered to take me to Western Auto Hardware to buy a bicycle. It was another random act, in keeping with his parenting style, entirely independent of any begging I had done here or there. But when you are one among six kids and Dad is giving, you take.

I picked out a honey-gold Schwinn Sting-Ray with long banana seat and high handlebars we called “ape-hangers.” It featured a treadless “drag-racing” back tire they called a “slick.”

It was a two-speed: crazy cool technology that shifted when you kicked the pedals lightly backwards, giving the pause-and-go feel of a real car. Kicking backwards also engaged that fat back tire brake, so I had to master the hairline difference between the upshift and the somersault.

It was new. It was mine. Not a hand-me-down, but my own bike. It was gold. It was beautiful. In two weeks, it was stolen.

My father railed and spit at how careless I had been to park it in front of our house, where I had parked every riding toy I had owned since birth. For years it was my parking lot. Today: how could I be so stupid?

After lots of stomping and spitting and ranting that I’d never own another thing as long as I lived if I didn’t take care of it, he took me back to Western Auto. I picked out a gleaming purple Sting-Ray, a single-speed this time, in humble penance.

After a spate of thefts not limited to our front yard, Dad built a metal shed with a locking door. He bought us each a bike lock too, as double insurance. Soon after, my brother’s three-speed English Racer was stolen, and we all twittered and whispered about who might have broken into our tin Fort Knox. The bike lock was melted through. Melted! Surely it was my older brother’s creepy friends, we murmured, hands a-wringing. God, how I loved the drama.

Weeks passed. Our fair city’s flock of Sherlocks turned up nothing. His bike was gone for good.

Then it appeared out of nowhere.

The Orange Krate was a revolutionary bicycle of the 1970s: dual hand-brakes, front and rear shock absorbers, and five speeds controlled by a shift knob. Not a little flick-lever—a real 6-inch long shift handle with an engraved ball on the end, suitable for a Camaro. The front tire was half as big as the rear, clearly to take advantage of the aerodynamic forces one could achieve exploiting this technology. The front tire featured a drum brake, because no mortal bicycle brake would stop this hot witch. It even had a flared rear fender to keep the bike under control at supersonic speeds. 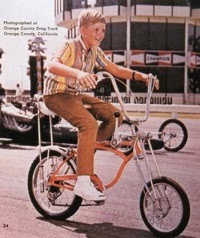 Having a drum brake and gearshift in the ’70s is the equivalent of having x-ray vision and nuclear missiles on your bike today. Without them, you are flaccid and meaningless.

As a boy viewing this ad, I noticed the word “Champion” in the background. I noticed that the boy on the Orange Krate was ahead of the dragster.

“How could you be so stupid?”

Older people say that as if little boys were supposed to be born forty years old.

But I wasn’t stupid. Not even then. I invented the Big Wheel.