Sailors get to yell a lot, which makes them sound important. “Avast! Mast a-beam! Yer wimmin or yer beer!”

They also have a different word for everything. A turn is a tack, unless it’s a gybe. Front, middle, back = bow, beam, stern. It makes skippers seem smarter than they are. I like that. A rope is a line, unless of course it’s a halyard. I asked a sailor once what the difference was between rope and line, and he answered, “Three dollars a foot. Har har har!” Sailors all laugh like that.

I love to sail, but I don’t know all the words, so I have to make some of them up. Last week my crew was trapping when the bow speared into a swell and we pitchpoled. Trapping is when you’re attached to the boat by a wire to your harness, and you lean clear off the side. Pitchpoling is sailing’s equivalent of pole vaulting: the bow of the boat buries into the water, the rear bucks up and everyone goes airborne. 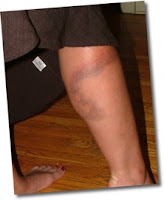 If you fall off the side of the boat while still attached to your trap line, that’s tea-bagging. But my crew didn’t fall; she swung at the end of her trap line all the way around the bow to the other side of the boat. I think I’ll call that may-poling. She hit just about everything along the way, which I’ll call pinballing. Then, as she cleared the front, the bow popped back up and the sailboat took off again, dragging her upside-down along the port beam. I’ve dubbed that an acrobatic malfortune. The daggerboard whacked her in the leg on her way by, resulting in one M-F-er of a bruise. It looks like a full-calf tattoo of a green and blue serpent.

She’d be a great skipper. She made up all kinds of words, right on the spot. They came so fast I didn’t catch them all, but I think a lot of them had something to do with my mother.

Okay, now I’m just being self-indulgent. Look up “pitchpole” on YouTube. The first movie is dramatic. The Hobie 18 movie second on the list is just like my boat, except I don’t have an oil tanker in the background and my theme music isn’t nearly as annoying.