Some people have perfect pitch. Most of us have relative pitch. A few of us bray like goats, which is fine too because goats are cute.

Relative pitch means you can sing Happy Birthday in such a way that other people recognize it. You may find yourself straining halfway through the song because the person who started the “Haaaaaaappy…” picked a note way higher than you’re used to, but who knew?

The guy with perfect pitch, that’s who.

Happy Birthday was written in the key of G, which means it starts on a D note.* People with perfect pitch can sing a D note on command. That sounds like a lovely gift, but the flip side is that every time someone sings Happy Birthday in a different key, which is to say every time, it sounds off to them. Out of envy I would hate people with perfect pitch, except that God has already cursed them for me.

*Yes, Happy Birthday was “written,” mostly by sisters Patty and Mildred Hill. Warner Music Group owns the copyright through the year 2030. That means every time you sing Happy Birthday publicly, you legally owe them a royalty. At last report, this earned Warner $5000 per day. Party-poopers.

I’ve played guitar since I was a kid. I can tune one up in seconds. It’ll sound great, unless you play it next to another guitar tuned to its correct pitch. Mine might be a whole note lower or higher, because the note to which I matched all the others was off in the first place. I have relative pitch.

To get around this shortcoming, I have various strategies for tuning accurately:

When you whack a tuning fork, it vibrates but you can’t hear anything. There’s nothing on it to resonate. But touch the ball on the butt end to the wood of a guitar and the whole instrument will sing the note. Likewise, a friend showed me that you can press the end of the ringing tuning fork against your front tooth, and your whole skull will resonate in perfect A-440. Nobody else hears a thing. Yes, I learned that in junior high. 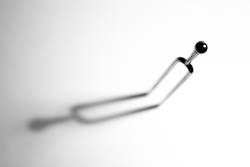 Sure, I could use an electronic tuner, but that’s for pussies.

To match my relative pitch, I have relative map skills. I can read and understand a map perfectly well regardless of which way it is pointing. This means I’ll always turn right if I am supposed to turn right, but I may turn north when I’m supposed to be going south.

Worse, in the real world I have a perfect sense of direction, but a backwards sense of where everything actually is. This was the fault of my 4th grade teacher. While we learned map skills, my desk faced south. As I learned the names, shapes and locations of every state in the U.S., I was facing backwards. Ask me to point north, and I’ll point north every time. Ask me to point to California, and I’ll show you New York.

Experts say language is best learned before the age of three. Map skills are best learned by age nine, after which the sense of place becomes cast in bone. As a result, I will forever see the world upside down.

Right now I’m looking out my window at Farnam Street, and I know I’m looking east. I know that beyond a few hills and one river lies Iowa, because I’ve been over there. After that my brain starts inserting Wyoming, Utah and Oregon. I’ve been to those states too, but I flew there on a plane, which is like riding an elevator: the door closes, then reopens to a completely different place, with no real appreciation of how you got there.

Here’s what I have to do to actually find something: point to where I think it is, freeze my body in that position, and rotate 180 degrees. It’s like having perfect un-pitch.

I suppose I could do what the pioneers did: cross the United States on foot, step by step, mile by mile, month after month, experiencing the sights, smells and feel of every hill in the whole continent. I find it’s easier to just be wrong.

It was in that very 4th grade class one morning when the teacher stood in front of a wall-sized map of the Western Hemisphere, surveyed her young students and asked, “Who can point out the United States?” Every hand went up except one. Earl was the hard-luck kid like every class has, the kid who gets picked on as the rest of us battle to position ourselves into the hierarchy of life. The teacher, aptly named Fairchild, knew his story: his parents were congenitally deaf, and as a result Earl had gotten a slow start. She felt he needed something in his win column. There was one word he dreaded most at that moment, and she said it.

He rose slowly from his chair in the back. There’s no rush for the gallows. As he passed midway down the center of the classroom he tripped on his own loose shoelace, sprawling on his face with a rumpled thud.

He picked himself up and shuffled to the map. He ran his finger across the brightly colored shapes, hoping one might reach out to save him. He was somewhere over Guatemala.

The teacher tried not to blink. After an eternal twenty seconds she asked, “Can anybody help Earl?” Every hand shot up. All of us could point out the United States. None of us helped Earl.

I’m grateful to have a decent sense of pitch, and a gift for picking out a harmony. I’m sensitive to music, which sings to my soul and plays in my mind all day like a radio. It’s part of my identify, which is why it’s hard for me to realize how my 4th grade heart could be so deaf.

← Something Fishy A Moving Day →